Becoming All Things to All Men for the Gospel 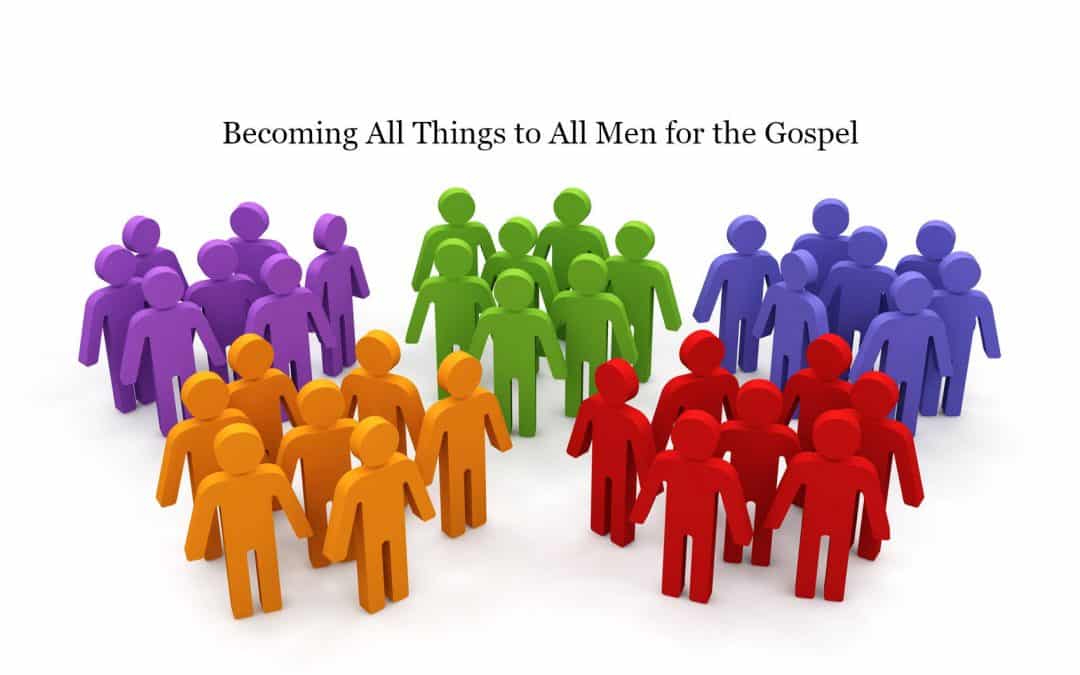 Becoming All Things to All Men for the Gospel

I have become all things to all men, so that I may by all means save some (1 Corinthians 9:22b)

What does Paul mean when he says he tried to become all things to all men? And how can that help save anyone?

The context of Paul’s words in 1 Corinthians 8-9 is Christian liberty. In chapter 8, Paul applies our freedom from the law to eating meat previously sacrificed to idols. Since in reality there are no other Gods, believers are free to eat if they want. That is their right. But there will be some who can’t escape the memory of the temple and so cannot, in good conscience, eat food from there. They fear that they are dishonoring God by doing so. With that perspective, they must not partake. To go against conscience (even an ill-informed conscience) is neither right nor safe. If you think it is wrong, don’t do it.

I can hear my professor’s voice in my head: “Love willingly lays down its rights for the good of another.” Paul has a right to eat meat, without raising questions about its source. But he willingly forgoes for the sake of his weaker brothers and sisters. It’s just meat after all.  Which brings us to chapter 9, in which Paul applies this to his rights as an apostle.

How Paul Became All Things to All Men

Those who preach the Gospel should make their living from the Gospel. That’s what the Lord commanded. The worker is worthy of his wages. The spiritual work that Paul is doing, which is providing eternal benefit, should be compensated.

Churches often compensated Paul for his work in the ministry (see Philippians 4 for one example). But with the Corinthians, Paul refused to make use of that with them for two reasons. One, he wanted to be able to offer it free of charge to please the Lord. As David said, “I will not give to the LORD what costs me nothing.” Paul’s job was to preach. If he preached, he was just doing his job. But if he paid his own way and preached for free, he could offer that to the Lord. The second reason is to not hinder the progress of the Gospel (1 Corinthians 9:12). Money was taken completely out of the equation. No one could accuse him of selfish enrichment.

Paul wrote to the Galatians, “For you were called to freedom, brethren; only do not turn your freedom into an opportunity for the flesh, but through love serve one another” (Galatians 5:13). Paul leveraged his freedom, not to gratify his desires but to serve others. He became all things to all men, that he might by all means save some. He avoided meat in the presence of those who could not eat, just like he offered his preaching free of charge to remove suspicion.

In Acts 21, Paul submitted to James’ advice for the sake of the many Jews who had believed in Christ and were zealous for their heritage. Even though Christ was the end of the Law for all who believe (Romans 10:4), Paul was willing to become like a Jew and participate in, and even pay for, the dedicatory vows of some of the group. In any situation, whether with Jews or Gentiles, Paul was willing to do whatever he could to not cause offense or hindrance. He would not, for anything or any reason, compromise the Gospel or try to remove the offense of the Gospel. But if he could remove any other offenses, he was willing to do that.

The Full Passage of “All Things to All Men”

Here is the immediate context of the passage we began with.

Far from being simply an interesting historical fact about Paul, it is meant to teach us something important.

If you are in Christ, you are free and you have rights. But love willingly sets aside its rights for the sake of others. Are there innocent things you are doing that obscure the Gospel for some? Obviously, Christian liberty is not a license to sin or to do things that diminish your soul. Those things will destroy you. But the Gospel does set us free from the rules and regulations. We are dead to the Law and alive unto God (Galatians 2:19).

Years ago, one of my college ministry students had us watch a video at our apologetics club. The video showed a man with a bullhorn outside a sporting event. He was yelling at the people waiting in line to buy tickets, even calling out individuals. The struggle for our group was that nothing this man said was actually false. There was truth in his general condemnations. He even seemed to be clear about the Gospel message. And yet, we all blushed.

On the car ride home, my son (then in high school), put his finger on the issue.

Even Americans have a culture. And in this culture, it is considered very offensive to call people out in public with a bullhorn.

As soon as he said it, I knew he had it. Why would we think it okay to be culturally offensive here but not overseas? I can’t imagine a missionary to Japan wearing his shoes into the home of the neighbor he was trying to reach.

I’m not saying there is not an appropriate method for street preaching. Ray Comfort is a good example of how to do it well. My point here is that there are things that we can do that add offense to an already offensive message. People don’t like the Gospel message because it insults their self-righteousness and condemns their pride. That part cannot be softened. But there is no reason for us to be offensive ourselves. In fact, we obscure the message when we are so.

Examples: How You Can Become All Things to All Men

Are you trying to reach your Muslim neighbor? If you are a man, don’t seek one-on-one conversations with his wife. That’s considered improper. Don’t write in your Bible in their presence. That’s considered irreverent. These are things you can easily accommodate without compromising the Gospel. These are things that may keep good communication lines open. Should one say, “peace be upon him,” whenever he uses the name of Mohamed? No. He was a deceiver who has damned millions by his doctrine and is under the wrath of God. You can’t have both Mohamed and Jesus.

Paul took Peter to task on this issue because Peter was inappropriately accommodating the Judaizers in Galatia. Peter had rightly turned his back on the Jewish tradition of not eating with Gentiles because they too are clean because of the Gospel. But when the Judaizers came, Peter withdrew from the Gentiles. His hypocrisy communicated that Jewish observances were necessary, when in fact they were not. See Galatians 2 for the whole story.

Are there things that you could do to identify with someone culturally that doesn’t compromise the Gospel? Nita and I were once invited to a Passover meal with our neighbors. It was a delightful time that promoted goodwill while not confusing the message of Jesus. Are there things that you can avoid that needlessly offend? Because my right hand was full of books, I once offered my left hand to shake hands with a middle-eastern Muslim. He looked taken aback. It was only later I learned that the left hand is considered unclean. I can avoid that easy enough now that I know. Love limits and even gives up its freedom for the sake of another.

What a privilege for you and me to adorn the Gospel in this way!

Be sure to subscribe to our evangelism podcast if you have not yet done so.