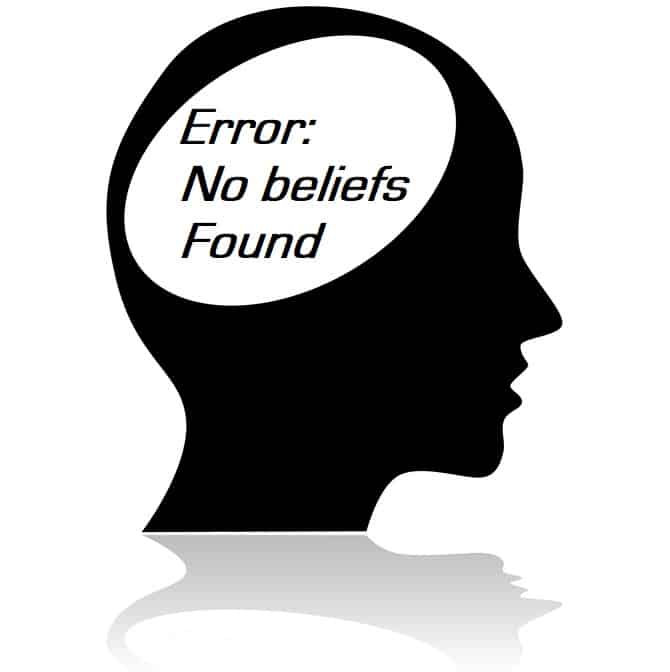 If you are engaged in spiritual conversations long enough, you will eventually hear the claim that “atheism is just a lack of belief in God.” This effectively makes the atheist position the default position, and forces the Christian to have to prove God’s existence. In today’s guest post, our friend Parks explains how to handle this objection.

Engaging others in spiritual conversations exposes us to the wide variety of beliefs that people hold. If you seek out opportunities to ask other people what they believe, it won’t be long before you encounter someone who identifies as an atheist or agnostic.

Now, depending on the individual, they could mean different things by “atheist” or “agnostic.” Traditionally, an atheist is someone who does not believe that God exists. An agnostic is someone who is withholding belief; that is, they are not sure whether God exists or not. However, you will find agnostics who make a stronger claim. Some say that no one can really know the truth about God. According to them we all have our beliefs, but no one really can claim that they know God.

“Atheism Is Just a Lack of Belief in God”

You will also run into atheists who use a different definition of atheism. This is that atheism is just a lack of belief in God. What they argue is that to be an atheist does not commit them to the positive claim that “there is no God”, but only that the reasons offered for God’s existence are not convincing to them.

Thus, for these atheists, they are not making any direct statements that deny God’s existence, but merely saying that they have not encountered good reasons to believe that God exists. An important concept to keep in mind when having conversations with atheists and agnostics is the burden of proof.

The Burden of Proof

It has become fashionable among such skeptics to set up conversations about God in a particular way. This is that the person who believes in God has all of the burden of proof in the conversation. The way this usually plays out is that the skeptic asks the theist to “prove” to them that there is a God. The theist then begins to offer reasons why they believe in God and the skeptic sits back and starts poking holes in their arguments.

In this scenario, the theist is doing all of the work and is pushing the proverbial boulder up the mountain the entire time.

Conversations like this are extremely one sided and usually the skeptic is not really open to the reasons being offered. It thus becomes an intellectual game. These kinds of conversations are a far cry from talking with someone who, even though they are skeptical, cares about truth and are open to having a back and forth dialogue about spiritual things.

Why Does This Happen?

This idea of placing all of the burden of proof on the theist can stem from two things. The first has to do with the particular definition of atheism being used: “atheism is just a lack of belief in God.” I think it is fair to point out that this is not how atheism has traditionally been defined. The very meaning of the word “atheism” can be seen from its composition. An atheist is someone who is committed to the idea that God does not exist. (The prefix “a” is a negation, “theist” refers to a person who believes in God). So, to be an “a-theist” is to be someone who denies the existence of God. It is to make a positive claim about the non-existence of God.

Another point to consider about this re-definition of atheism is that even if we grant that they lack a belief in God (since they are not convinced by the evidence for God), they do not lack a belief about God.[1]

They are still committed to the idea that there is no God. Once this has been pointed out, it becomes clear that the atheist has a burden of proof just as much as the theist.

The same thing is true for the agnostic. Whether the particular person is simply not sure about God’s existence or if they hold that no one could ever be in a position to know about God, they still have a burden of proof. This is because they are committed to particular beliefs about God just as the theist.

“Atheism is Just a Lack of Belief in God”: Is Atheism Really the Default Position?

The second idea that can feed the notion of the theist shouldering all the burden of proof is really a summary of some points that have already been made. Many people think that to be a skeptic about God’s existence is the “default” mode. They claim it is the rational place to start thinking about God. However, it is hard to understand what makes this idea true. It could equally be argued that the “default” place to be is to believe in God. In this case, we could say the atheist has all of the burden of proof. In the end, both the theist and the atheist have a burden of proof to shoulder. Both are committed to specific beliefs about God. So it is reasonable to ask what the reasons are for belief in God as well as the denial of God’s existence.

The next time you encounter someone who identifies as an atheist or agnostic, ask them what they mean in describing themselves this way. What are the reasons that convince them their beliefs are true? Be ready to share some of your reasons for believing in God, but don’t let the conversation be one-sided. We want to have genuine conversations with people about spiritual things in an effort to point them to Christ. This cannot happen if skeptics are not honest about why they believe what they believe.