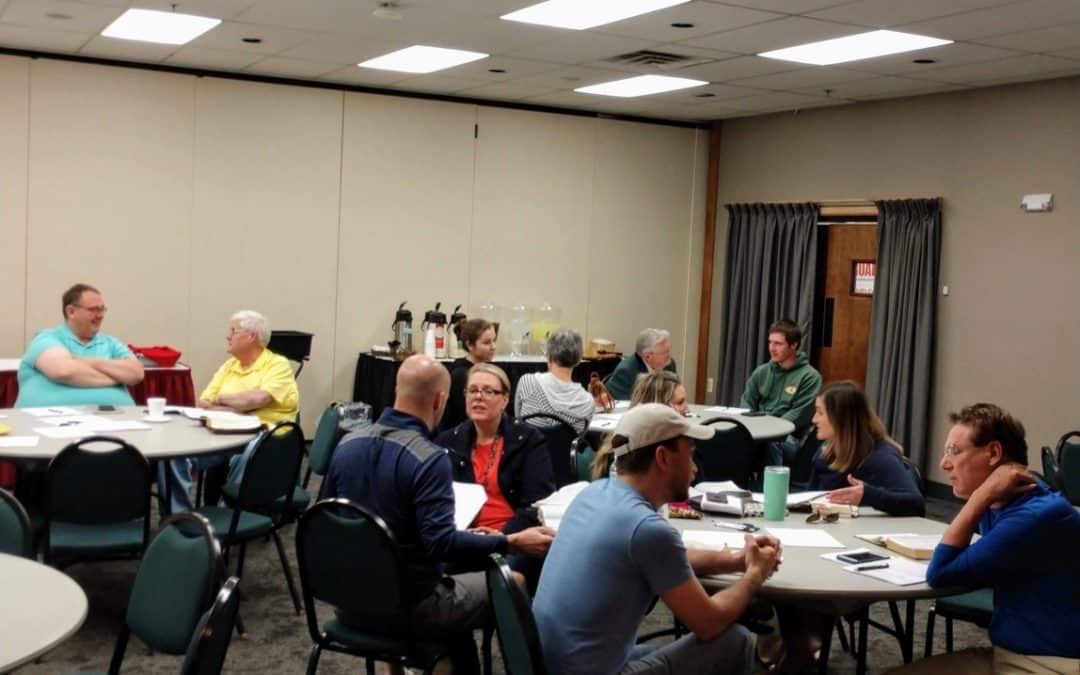 “Matt and Greg gave such an inspiring and Biblical-based training and knowledge of Scripture, and when and how to talk about JESUS.” -Robert (evangelism training event attendee)

On May 31 and June 1, our team hosted an evangelism training event with around 30 attendees from several churches in Central Maine. This training was the first part of a larger plan leading up to Engage U Maine. Engage U Maine is a 3 day evangelistic outreach at the University of Maine-Orono. The Engage U event will be a great opportunity for attendees to see the training they received modeled live. It will also be an opportunity for them to put the training they received into practice. The training at the end of May focused on three areas:

Our time was highly interactive, involving a lot of audience participation. This included open discussion, guided scenarios, and role playing. We began by focusing on the basic Gospel message repeated throughout the New Testament. For our training we focus on the Apostle Paul’s delivery of the Gospel as found in 1 Corinthians 15:1-8:

Now I would remind you, brothers, of the gospel I preached to you, which you received, in which you stand, and by which you are being saved, if you hold fast to the word I preached to you—unless you believed in vain. For I delivered to you as of first importance what I also received: that Christ died for our sins in accordance with the Scriptures, that he was buried, that he was raised on the third day in accordance with the Scriptures, and that he appeared to Cephas, then to the twelve. Then he appeared to more than five hundred brothers at one time, most of whom are still alive, though some have fallen asleep. Then he appeared to James, then to all the apostles. Last of all, as to one untimely born, he appeared also to me.

The Essence of the Gospel

You can read our blog post on “What is the Gospel?” for more detail, but we can break the above verses down to these four points.

That’s it! It is that simple. Of course there is a context as to why we even need a Savior, but the Gospel itself is quite simple. You could say, “Jesus died for the forgiveness of sins and was raised proving He was victorious over sin and death.”

It is great to memorize Bible verses, learn visuals to help share the message, and learn how to answer hard questions people might ask. However, we don’t need to reach “expert” level before we are prepared to share the simple, life-saving message of the Gospel. One attendee, named Sarah, had expressed that before the training she thought she needed to memorize 40 Bible verses before she could share! She felt this even more due to some unhealthy teaching she had fallen into previously. But after the training she wrote to us:

The training motivated me to be bold and not to avoid spiritual conversations. I had been contemplating volunteering at our local county jail, and after utilizing techniques learned in training during the role playing segment, with a friend from our church, she encouraged me to sign up to volunteer. I start orientation on Thursday and look forward to meeting with the women and sharing the gospel at our local jail. I feel this training confirmed and equipped me to stand firm on the true gospel of Jesus Christ.

We are so excited for people like Sarah and cannot wait to see them again on the campus at the University of Maine in September.

How Do We Apply Biblical Evangelism Principles Today?

We also took time to focus on applying biblical evangelism principles and how they might apply today. We compared Peter’s approach to his Jewish audience in Acts 2 and Paul’s approach to his Greek Philosopher audience in Acts 17. As a group we worked through similarities and differences. The E360 training process hones in on the fact that throughout the New Testament, evangelism is based on knowing the audience and presenting Christianity in a way that will meet them where they are. Paul did this in Acts 17 by recognizing their religious zeal, a statue to an unknown god, and quoting their pagan poets. All this was to meet them on common ground and bridge to the One True God and the Gospel of Christ. The trainees agreed that in the modern day, especially in Maine, the culture is much closer to Acts 17 than Acts 2.

To help think through how to apply the principles today, we guided the group through several different scenarios. In the scenarios we gave some background information on an individual and how the trainees were to pretend they “knew” the person in the scenario. We then had the character in the scenario make a statement which the group had to work through together to think how to respond. They were told to consider not just the comment but the background information they had on the person. This involved thinking of questions they would ask the person, ideas of what they think may have influenced the person, likely barriers the person has to accepting Jesus and Christianity as true, and also how they might respond to the specific statement made.

The evangelism training event was completed by a final one-on-one role play where they tried to share the Gospel with their partner. This final role play was the third time they had attempted to share the Gospel in a role play. The overwhelming consensus was that the first time almost everyone struggled to be clear and concise, but by the third time they did a pretty good job. Everyone came away eager for more and showed quantitative growth based on post-training surveys. One of the pastors who attended has become a good friend of the ministry. We are excited to work with him more in the future. His name is Sam, and he wrote:

This is exactly what our church needs! As a Pastor I recognize the need to not just teach but to also train God’s people to do what God has called us to do. We have done other programs in our church, and while they were good, the key is to actually get people to have confidence to move outside their comfort zones and have spiritual conversations. That is only going to happen when we walk alongside them, modeling for them what it looks to like to naturally share their faith. I love what Engage 360 is doing as it seeks to partner with and help local churches accomplish God’s mission to make disciples.

We are eager to return to Maine to reconnect with our new friends and make many more! If you are interested in joining us or helping support the University Evangelism outreach check out the page with more info here. You can also listen to our podcast with Travis Pelletier who is the campus minister at the University of Maine helping to facilitate the Engage U event. Be looking for more information in the weeks ahead!